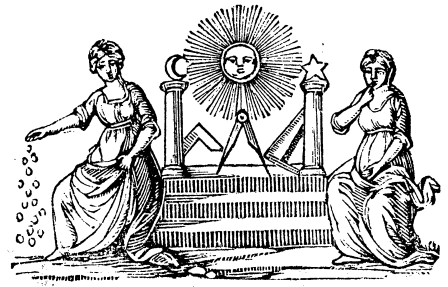 The order of Freemasons is a brotherhood of virtuous men, centuries old, its origins lost in the mists of antiquity.  Descended from the lodges of working stonemasons, Freemasonry as we know it today became organized in its present form in 1717 London, and soon spread throughout the world.

Freemasonry is said to be a system of morality, veiled in allegory and illustrated by symbols.  Freemasons are taught to practice the truly commendable virtues of Brotherly Love, Relief, and Truth.   Avoiding all sectarian and political division and disputes, Freemasonry is based upon the universal brotherhood of Man under the fatherhood of God and extends its charity to all Mankind.

Famous Freemasons who have left their marks on history include patriots such as George Washington, Benjamin Franklin, Samuel Adams, John Hancock and Paul Revere, world leaders such as Franklin D. Roosevelt, Harry Truman, Douglas MacArthur and Winston Churchill, pioneers such as Lewis and Clark, Charles Lindbergh, Richard Byrd and Buzz Aldrin, and great artists and entertainers such as Mozart, Robert Burns, Will Rogers, John Wayne, Duke Ellington, and Rick Wakeman.

A candidate for Freemasonry must be male, at least 18 years old, and believe in a Supreme Being.  Solomon’s Lodge welcomes inquiries from all qualified men of good character who are interested in fellowship, self-improvement, charity, moral and esoteric education, and being part of an illustrious history.  Inquiries should be directed to solomons196ny@gmail.com.